Chihiro Komiya (小宮 千尋) is an elementary school student who begins working as a housekeeper at his wealthy uncle's home after his mother dies. He likes things to be clean and is also a good cook.

Chihiro has long, loose brown hair and olive eyes. When people from his mother's side of the family see him, they think he is the spitting image of his mother. Chihiro is of average build for a fifth-grader; however, he is sometimes mistaken for a girl due to his appearance. He wears a frilly uniform made by his uncle, who loves girls' clothing with frills.

Chihiro is a neat freak who takes it upon himself to be Madoka's housekeeper, which proves to be difficult because his uncle is a slob and a packrat. He is also good at cooking, as demonstrated when he makes meals every day for Madoka and himself. His highly disciplined ways conflict with the carefree ways of his uncle, which leads to him scolding Madoka on many occasions. Though he initially feels apathetic toward Madoka, he comes to genuinely love and appreciate him over time.

Chiyo Komiya: Chihiro's mother. The two lived together by themselves before she died due to overworking herself. She is depicted as a caring mother who worked hard to take care of Chihiro. It is also shown in his memory that she liked to keep things from when Chihiro was smaller like the note from the first time Chihiro went shopping or his first drawing of her, which he commented as horrible. She was not home most of the time due to work, which is why Chihiro took a long time to let the reality of her death sink in. Nevertheless, the two apparently got along well.

Chihiro's father: Chihiro does not have many memories of his father, as he died while Chihiro was still very small. Chiyo showed him pictures, albeit blurry ones, since she took them secretly, or his father shielded his face from the camera.

Madoka Takatori: Chihiro's uncle. Madoka takes Chihiro in after Chiyo dies, as part of a promise he made with her. Although Chihiro is strict with Madoka, he seems to truly care about him. Madoka acts more like a child and Chihiro is more like an adult in their family.

Yuji Hino: Chihiro's best friend. He is middle of six children in the Hino family and is concerned about Chihiro since his mother's death, proving to be a loyal friend. He has silver hair, dark eyes, and loves horror films. He is good friends with Madoka because his family has worked as Madoka's gardeners for years. 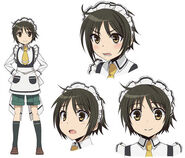