Miyako Ōtori (凰 美耶子) is a female protagonist and one of the main characters in the series. Miyako also has a crush on Keiichirō Shinozaki

Miyako has fair skin, light brown eyes and long peach-coloured hair which is always tied into two pigtails and straight-cut bangs during the day. She officially works for Madoka, therefore wearing a custom maid uniform he created for her.

Miyako is terrible at cleaning, but an expert on cooking, which is shown to be evident in Episode 02 - Failure Is the Mother of Success. It is shown that she has a crush on Keiichirō Shinozaki.

Miyako has been in love with Keiichiro since she was very young. She often expresses her love for Keiichiro many times in both the manga and anime, yet Keiichiro is oblivious to her crush on him. 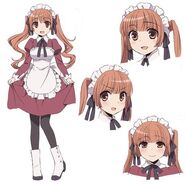