Edit
watch 01:36
We're Getting Mutants in the MCU - The Loop
Do you like this video?
Play Sound

Yūji Hino (日野 祐司) is an elementary school student who is best friends with Chihiro. He is the middle of six children in the Hino family and is concerned about Chihiro since his mother's death, proving to be a loyal friend. He has silver hair. His family owns three dogs and are carpenters. He likes spicy food and is good friends with Madoka (his family having worked as Madoka's gardeners for years). He loves horror films.

He is a young boy with silver hair and a warm smile. He is usually seen with Chihiro or his other friends.

Yuji Hino is friendly, reliable and loyal. He loves to tease Madoka and Chihiro the most.

Chihiro is his best friend, he is also very close to the rest of Chihiro's family. 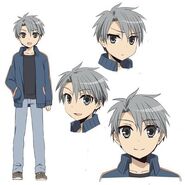